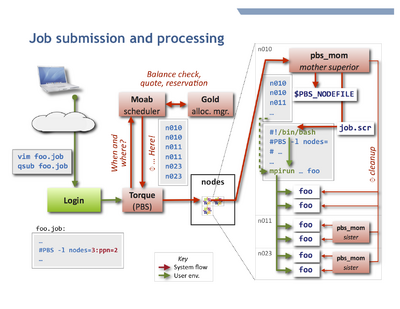 Processing flow of a typical job.

A Torque job script is usually a shell script that begins with PBS directives. Directives are comment lines to the shell but are interpreted by Torque, and take the form

The job script is read by the qsub job submission program, which interpretes the directives and accordingly places the job in the queue. Review the qsub man page to learn about the options accepted and also the environment variables provided to the job script later at execution.

For most scalar and MPI-based parallel jobs on Carbon the scripts in the next section will be appropriate. Some applications however require customizations, typically copying $TMPDIR to an app-specific variable, or calling MPI through app-specifc wrapper scripts. Such application-specific custom scripts are located at the root directory of the application under /opt/soft, and can typically be reached as:

where APPNAME is the module name all UPPERCASED and with "-" (minus) characters replaced by "_" (underscore).

To find variables of this form:

Here are a few example jobs for the most common tasks. Note how the PBS directives are mostly independent from the type of job, except for the node specification.

This is the default user environment. The openmpi and icc, ifort, mkl modules are preloaded in the system's shell startup files. The InfiniBand fast interconnect is selected in the openmpi module by means of the environment variable $OMPI_MCA_btl.

In the last form, anything after programname is optional. If you use specific redirections for stdout or stderr as shown (>, 2>), the job-global files job.out, job.err declared earlier will remain empty or only contain output from your shell startup files (which should really be silent), and the rest of your job script.

To select ethernet transport, such as for embarrasingly parallel jobs, specify an -mca option:

Under Intel-MPI the job script will be:

As of late 2012, Carbon has 28 nodes with 1 NVIDIA C2075 GPU each. To specifically request GPU nodes, add :gpus=1 to the nodes request. At the moment this is synonymous with but preferable to specifying …:gen3.

Job scripts in other scripting languages

The job scripts shown above are written in bash, a Unix command shell language. Actually, qsub accepts scripts in pretty much any scripting language. The only pieces that Torque reads are the Torque directives, up to the first script command, i.e., a line which is (a) not empty, (b) not a PBS directive, and (c) not a "#"-style comment. The script interpreter is chosen by the Linux kernel from the first line of the script.

As with any job, the script execution during the job begins in the home directory, so one of the first commands in the script should be the equivalent of cd $PBS_O_WORKDIR. If you wish to use test your script interactively, you must avoid accessing the PBS_O_WORKDIR variable. (This problem - and a solution - exists for bash-based job scripts as well but usually having to use mpirun and to name the machinefile makes the expected environment more obvious.)

Then, a job script in Python would typically begin like this:

Important: The job script interpreter only ever runs in serial, on one core. Any parallelization must be initiated by one of the following mechanisms:

The latter is not to be confused with using mpirun to start several Python interpreters in parallel, which is how GPAW and ATK operate:

The parameter for option -A account can take the following forms:

cnm23456
for most jobs, containing your 5-digit proposal number.
user
(the actual string "user", not your user name) for a limited personal startup allocation.
staff
for discretionary access by CNM staff.

You can check your account balance in hours as follows:

The relevant column is Available, accounting for amounts reserved by current jobs and credits.

You can refine the node selection (normally done via the PBS resource -l nodes=…) to finely control your node and core allocations. You may need to do so for the following reasons: